Have you ever wondered what your library card sounds like? 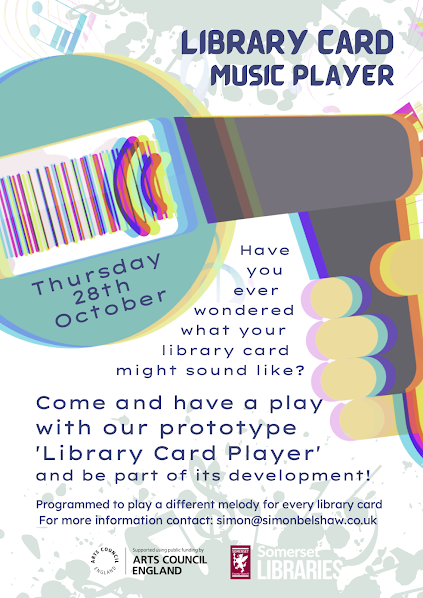 Have you ever wondered what your library card sounds like?
I am working on a  a project with three libraries (Taunton, St. Thomas (Exeter) and Torquay) to create an engaging user experience using a Library Card Music Player. This project is funded by Arts Council England.  The idea for Library Card Music Player Project is to build three music-generating devices that will be installed into three different libraries.  Each device will produce and play a short melody created from a borrower’s library card and, every time a borrower uses the card, they will hear the same tune.
Most libraries now have self-issue card machines and, in a similar way, users can scan their library card to produce a melody, almost like self-issuing their own tune. We hope that by engaging borrowers in such a unique way, this will attract more users to libraries.These devices will be bespoke for each library and workshops will be hosted to outline the possibilities, to discuss the technology used (Raspberry Pi computers), and to even create a unique device based on audio contributions of their own if desired.  By doing so, libraries will feel they have contributed in some way to the development of the work and will have a sense of ownership of the project.
The first workshop is at Taunton Library on Thursday 28th October followed by St. Thomas Library on Saturday 30th October. Details for the Torquay event to be announced.