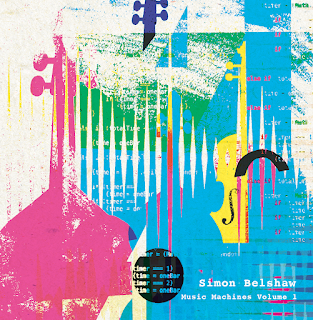 I arranged all four for strings, two of them used a string quartet, one only violins and the other violin, 4 violas and 'cello. The performers are Julie Hill (violin and viola) and Hilary Boxer ('cello). Over a period of a few days I recorded both live segments and single notes. All these recordings were then put together using Logic to create the finished version.

I asked Laura Collins to design a cover (based loosely around the old nonesuch covers) and used shortrun cds to produce 100 copies. The cds have been hand numbered and are now available from bandcamp. The tracks can also be streamed on spotify, apple music and other sites.

There is a page on my website that gives more information if you want to read more. The press release is as follows:

Simon Belshaw is a music composer from Exeter, United Kingdom.  He studied composition with the renowned Gavin Bryars and completed his PhD at the University of Hertfordshire in 2005.  Belshaw has had numerous pieces performed by various ensembles in various locations, including New York, Montreal, Belfast, and the UK.  Additionally, Belshaw has produced multimedia installations and has had pieces sited on Sonorities, Audiograft, and other festivals.

Belshaw has released a four track cd and digital downloads of some Music Machine recordings. The four pieces are Music Machine 26, Music Machine 28, Music Machine 29 and Music Machine 34. They are performed by Julie Hill (violin and viola) and Hilary Boxer (‘cello) and were recorded in the autumn of last year. The pieces use a combination of traditional music scores, web based scores and technology. Similarly the recording process used both traditional studio techniques and contemporary methods of constructing pieces note by note using software in combination with live performance.

"Wonderful sense of patience and harmonies rubbing together."

The result is four unique sounding, quiet, meditative works. They share elements such as contrasting one line with several, fading in and out, silence, stretching and contracting. Using close-miking the sounds are spare and the slow pace allows the listener time to focus on texture and timbre.

The cd is limited to 100 copies and comes in a single cardboard sleeve with a cover designed by Laura Collins and is available from Bandcamp. Digital downloads are available from all the major streaming and download stores (itunes, spotify etc).

“I wish we had had time to play it again - as always with these pieces, despite their apparent simplicity there is a lot to learn as an individual and as a group.” Emma Welton, Aubergine Family Orchestra.

"Which particular works do you think you collectively perform best?