To buy your ticket for Machine Music at the Exeter Phoenix click here.

I've been using a computer for a while now to create music machines, small programmes that run by themselves and generate music within certain parameters. You can read about them (and download some) here.

More recently I have started to combine the computer generated aspect of creating music with live performance. The first machine that I adapted in this way was Music Machine 1 which you can read about here and even try it out with a group of friends.

I have also recorded some machines for live performance in specific locations or for particular events, this year Music Machine 29 has been played at the Sonorities festival and Music Machine 31 formed part of VoxNovus 60x60. To create these I have been using a Raspberry Pi computer running a version of linux and I have written the code in python.

I have always been interested in process and systems and particularly in the idea of systems that breakdown. In Michael Nyman's book Experimental Music: Cage and Beyond he writes of John White's music '... being English they are ambling, friendly, self-effacing systems, which may break down.' (Coincidentally John White's Humming and Aah-ing Machine forms part of Sunday's concert).

Music Machine 4 consists of 14 cells of music ranging from 4 to 16 cells. For this performance each member of the string quartet has an ipad which displays the cell to play and how it should be played. The performance options are style (pizz, arco etc), dynamics and transposition (an octave up or down). The piece begins slowly with comparatively long pauses between cells, those pauses grow shorter and towards the end the computer joins in playing pre recorded clips of the cells.

Music Machine 26 consists of a slow, sustained chord progression played by the quartet. The progression is played three times. During the first play the computer records a number of clips of varying length. In the following two repeats of the progression the computer plays back those clips over the live quartet at random times. 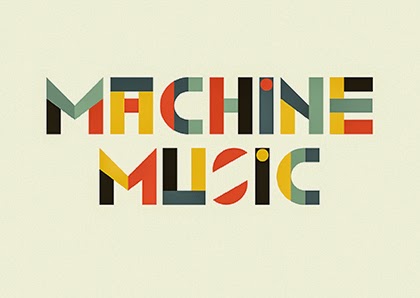 Posted by Simon Belshaw at 07:01 No comments: