I was asked to talk about my Music Machines, the concert in the FabLab, the FabLab in general and Exeter Music Hack on the Culture and Review show on Phonic FM 6/8/15.

Here's a recording of the show.

I am delighted to be a recipient of the Francis Chagrin Award. I applied for this to help with the costs of developing Music Machine 37 for performance in the FabLab concert. I needed to get a Raspberry Pi 2 and some other bits and pieces so that all the players had identical equipment, so I was really please to get some help with that.

You can read more about the award here.
Posted by Simon Belshaw at 02:10 No comments:

I arranged and adapted six Music Machines for this concert (1, 4, 28, 29, 34 and 37) and was joined by Julie Hill (violin) and Ruth Molins (flute). Julie and Ruth also played midi wind controllers for Music Machine 1, Julie and I used Casio Digital Horns and Ruth a Yamaha WX5. We used a Roland PMA-5, a Roland MT-300s and a Yamaha PSR-340 keyboard for the sounds.

I also set up the physical Music Machines 2 and 30 (both triggered by an ultrasonic sensor) and Music Machine 35 (a RFID reader) in the library foyer and at a couple of locations on the way to the FabLab so people activated them as they walked past.

The concert went well and without any major hitches although there was a moment of panic when the mixing desk started making a horrendous noise about an hour before the concert was due to start. Thanks to Ian Woodbridge who sorted this but it did result in me having to use my Spirit Notepad which didn’t have enough inputs for us all so I had to swap leads between pieces.

We each had a Raspberry Pi 2 with USB sound cards for the audio (used in Music Machine 4) and I designed a web browser interface that each player viewed on their individual monitors.

This version of Music Machine 1 was played on three midi wind controllers. The web-page shows red or green, red for silence and green for play. When a player blows through the controller the Raspberry Pi makes the rest of the decisions; how many voices will sound, which sound each voice will have, how loud each voice will be and where in the stereo field the voice will sound. The piece was written to have more voices sounding in the middle than at the beginning or the end.

This version of Music Machine 4 was played on three keyboards (computer keyboards not musical ones). The web-page shows the player which letter to press on the keyboard. Each letter triggers a different sample. The piece is designed so that the gap between the samples get shorter as the piece progresses.

This version of Music Machine 28 was for violin, flute and Casio Digital Horn. The web-page shows the players which note to play and for how long to play it; each note is faded in and out.

Music Machine 29 is for solo midi wind controller and was played using a Yamaha WX5. This was originally written for the Sonoroties Festival 2014.The piece consists of two parts and works in the following way. The first part plays a C major scale (both ascending and descending) and arpeggio. The second part remembers each note that the first part plays and stores them in a list. It will then choose a note from that list to play back simultaneously with the first part. Occasionally the programme will delete (forget) some notes from the list and then start remembering again. There is also the chance that notes will be sustained allowing chords to build up.

Music Machine 37 was a new piece written for this concert. It uses Bach's Invention No.8 in F and is a violin and flute duet. The players' screens display the score in full but then starts replacing bars with randomly chosen ones until the music disappears.

This concert was part funded by Exeter Arts Council and was supported by FabLab Devon and Exeter Library.
Posted by Simon Belshaw at 02:02 No comments:

Not long to go now until the concert, we have a rehearsal tomorrow night and then a brief run through on Friday.

I've prepared everything as best I can I think although I will probably tweak some of the pieces after the rehearsal.

In the meantime here are 3 screens of music machine 1 - can you guess what it will sound like?


And here's the same for Music Machine 4

Tickets are still available for Friday night - get them from here:

Posted by Simon Belshaw at 10:33 No comments:

Next week (Friday 10th July) will see a concert of Music Machines in FabLab Devon (Exeter Library). I think this is probably the first time a FabLab has hosted an event such as this, certainly the first for the Devon FabLab.

Really looking forward to it but I still have lots to prepare. There will be three performers, me, Julie Hill (violin) and Ruth Molins (flute), we will also be using Casio digital horns and a yamaha wx wind controller. These will be linked up to midi sound modules.

The Music Machines started life as entirely computer generated but recently I have  created ones that involve live performance and I have adapted some of the earlier ones for live performance. The musicians are given instructions by the computer (in this case Raspberry Pis, these instructions will be different each time the piece is played.

Have a listen to Music Machines 4 & 34 (versions of which will be performed in this concert) here:

Here's a video of Music Machine 28 ( a new version of which will be performed): 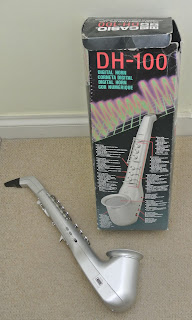 3 Raspberry Pis - one for each performer:

Posted by Simon Belshaw at 01:53 No comments:

Posted by Simon Belshaw at 06:16 No comments:

I have finally finished rebuilding Music Machine 30 from its original wooden construction to a clear perspex frame. 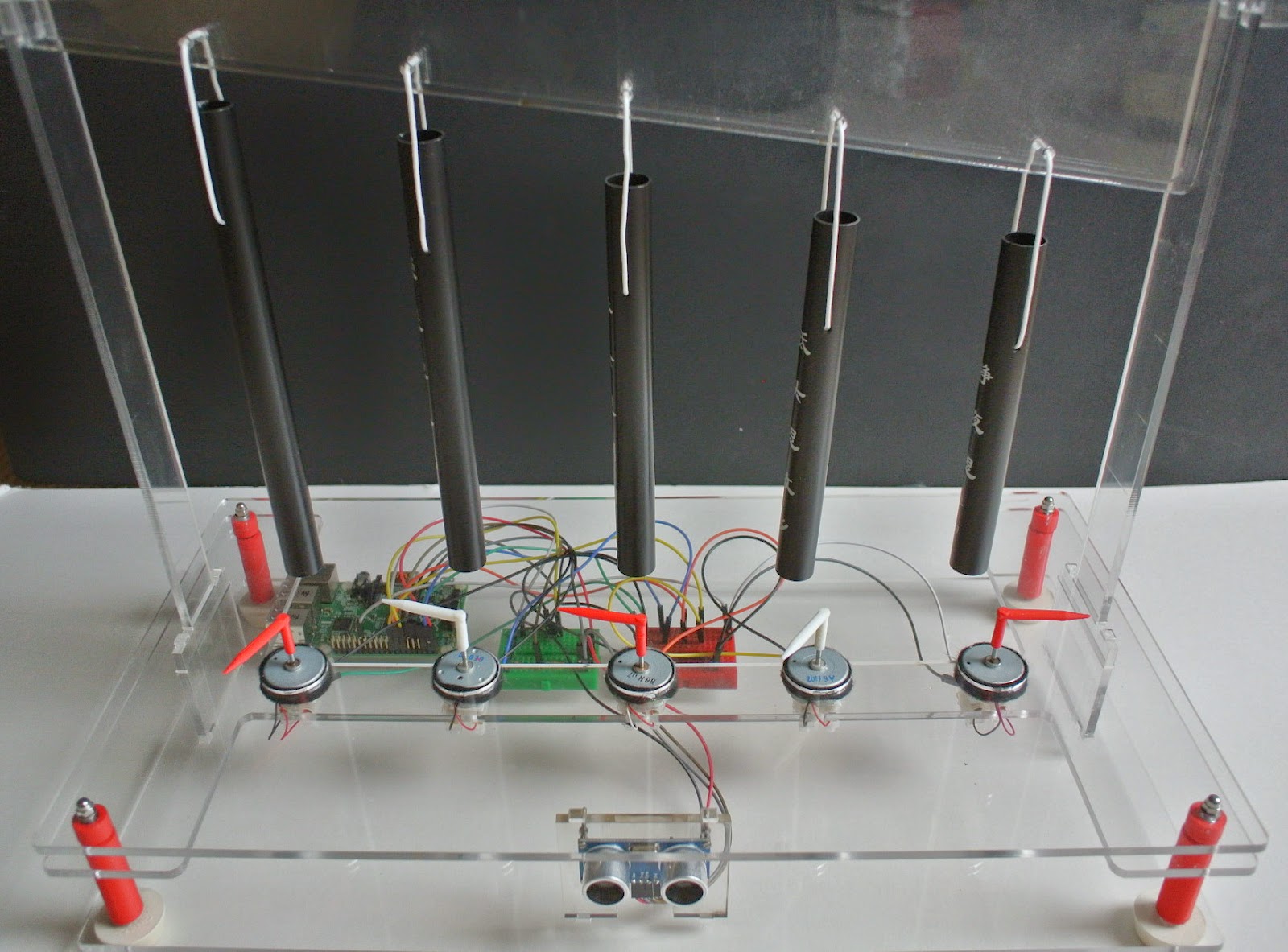 Apart from the design (which I did using Freecad software) the only other change is that I have used a Raspberry Pi B+ instead of the model B I was using before.

There are some 3D printed parts - the hammers that sit on the motors: 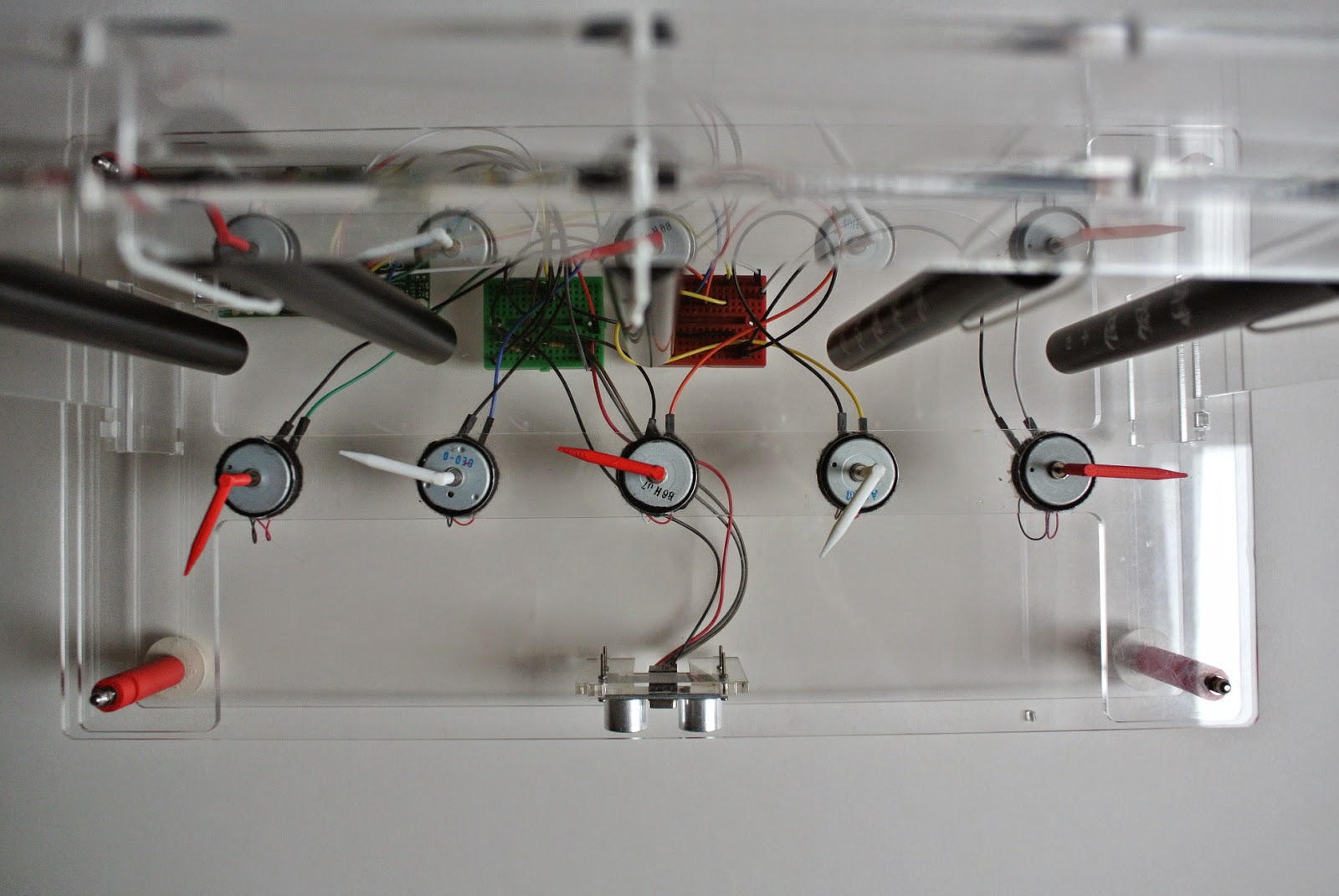 and the structural supports in the four corners: 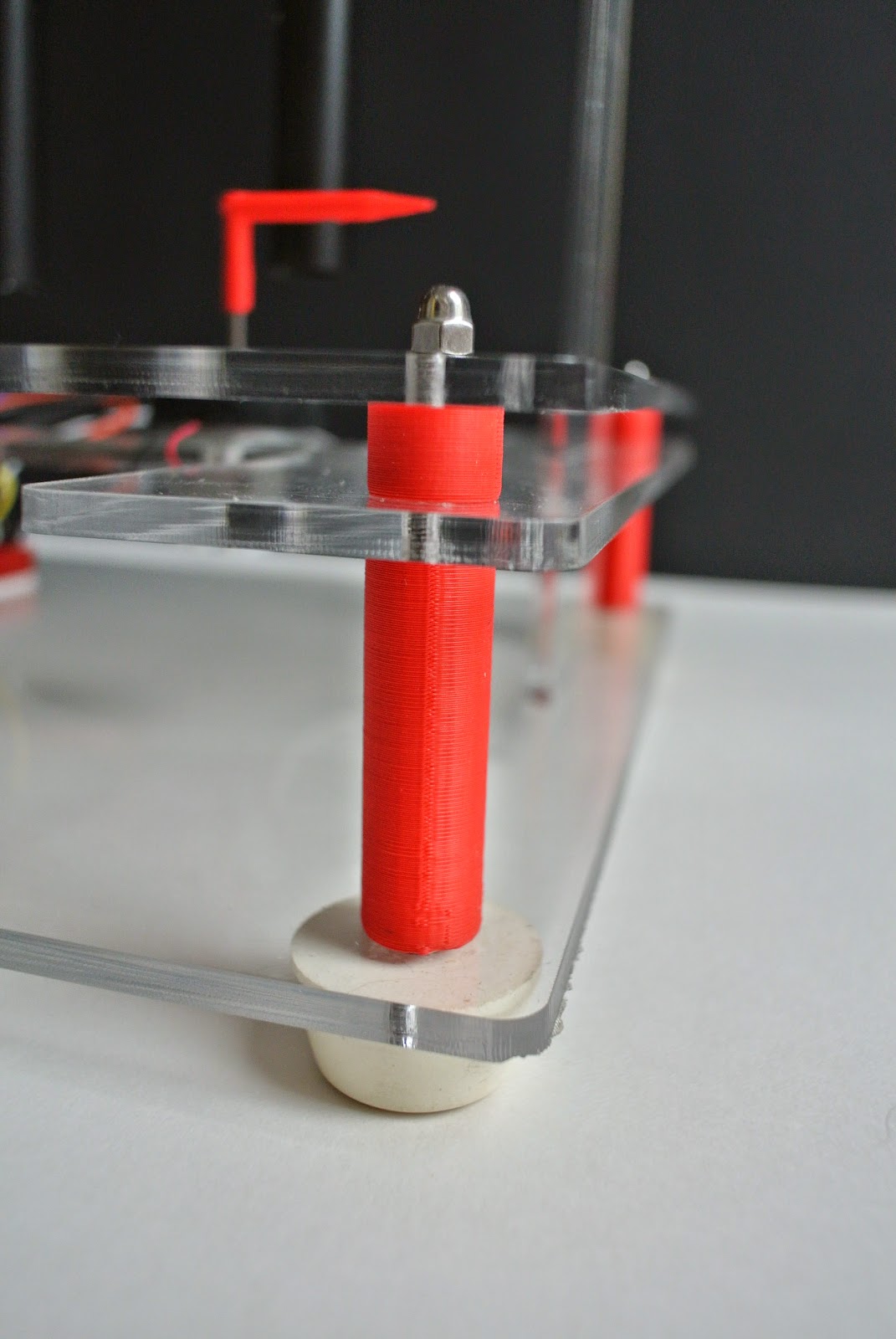 The whole project has been completed at FabLab Devon in Exeter Library using their laser cutter and 3D printers. 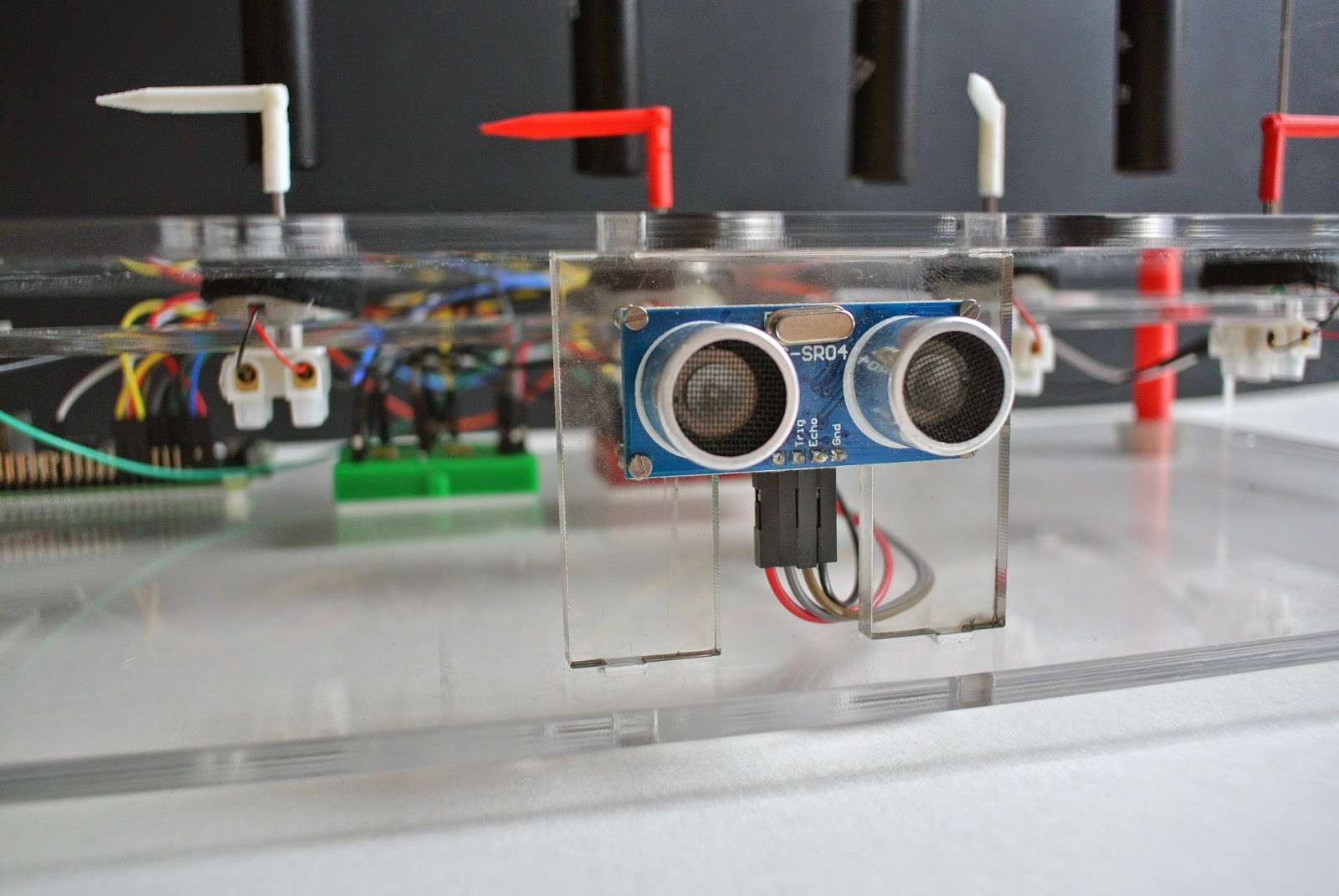 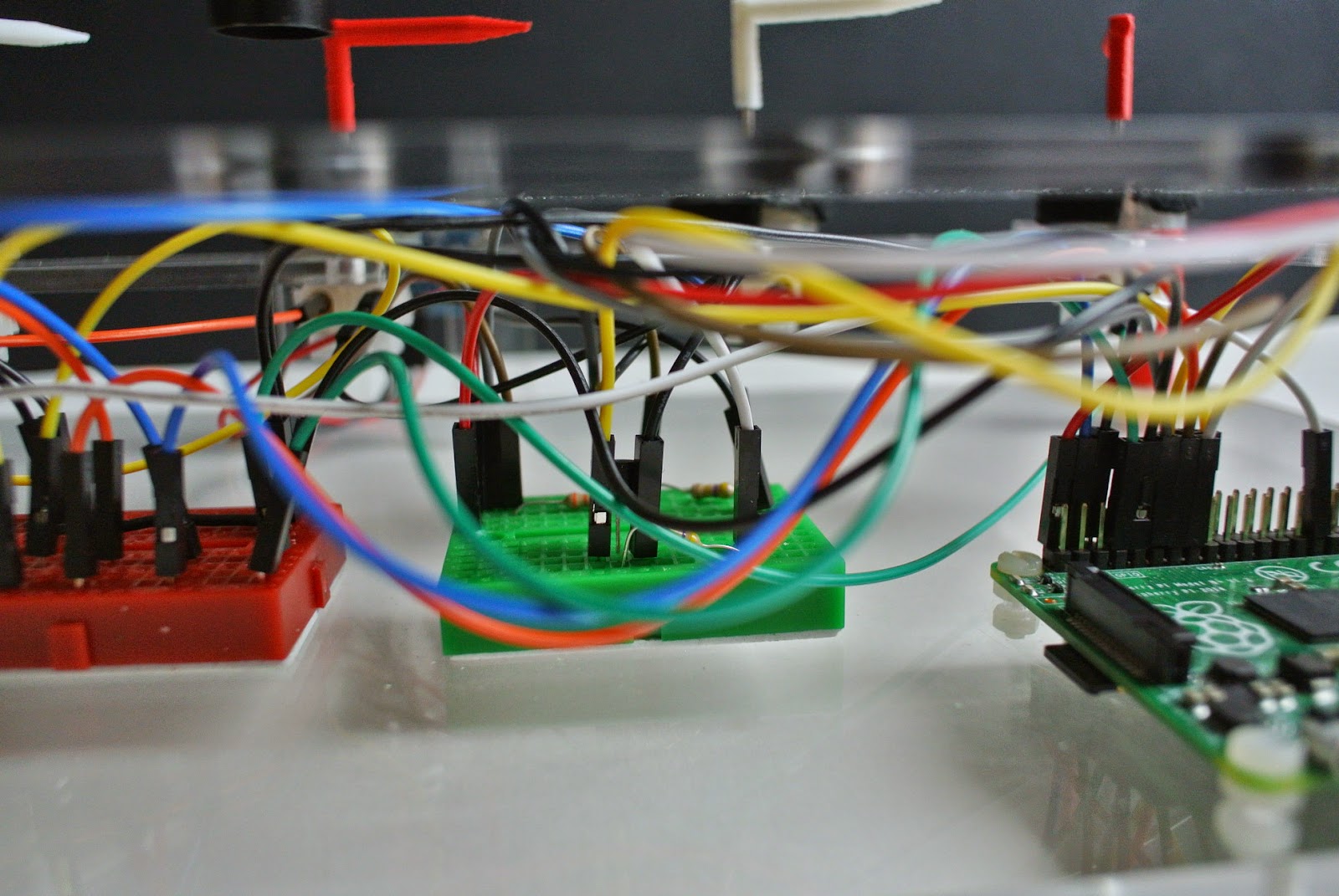 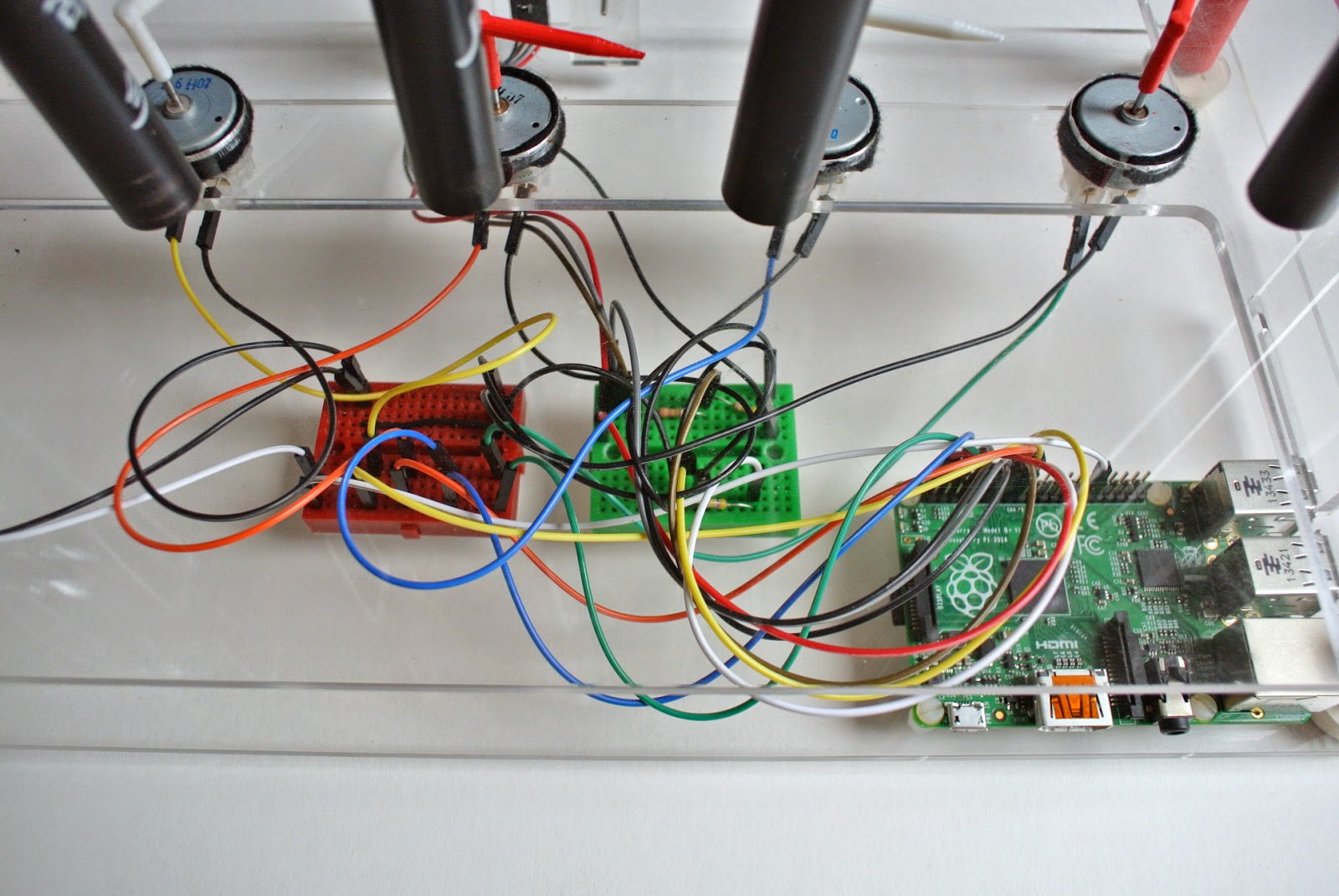 Here's a link to the original post about Music Machine 30.

And here's a video of it in action:

Posted by Simon Belshaw at 06:14 No comments: