Music Machine 40 is a new piece designed for eight Raspberry Pi computers with ultrasonic distance sensors. On 8th October at Exeter Library we will be building the machine in a morning workshop (10am - 1pm), we would like eight people to help us (tickets cost £5 and are available from Exeter Library 01392 384218 exeter.library@devon.gov.uk). 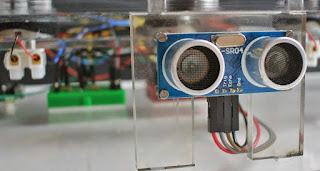 Once the music generating devices are built we will place them around the room and listen, alter, improve and enhance the sounds and composition until it is ready for people to come in and play it. The notes will be triggered by people and their movements when they are close to one of the eight generating devices. Moving closer or further away will change the pitch and possibly other parameters as well.

The afternoon session is open to anyone and will be free; the machine will be running from 1pm to 5pm in the Rougemont Room at Exeter Library.

This work is developed and produced by 2.times do and supported by Exeter City Council and Devon Libraries.

Posted by Simon Belshaw at 00:34 No comments: