Just a quick post to let you know that I will be on BBC Radio Devon's Breakfast show tomorrow (Friday 29th May) at around 7.50 to talk about the soundmap project. You can listen here: https://www.bbc.co.uk/sounds/play/live:bbc_radio_devon (or on sounds afterwards).
Posted by Simon Belshaw at 23:30 No comments:

Over the last weekend I have completed the covid soundmap. I added the final two recordings to the map and have made a final version of Music Machine 45. The last two recordings were both made on Thursday 21st May in Exeter. The first was made in the morning when I walked into town and features the sound of some of the building work that has restarted on the bus station area. The second recording was made around lunchtime when I walked near County Hall. You can hear the sounds of children playing at the nearby St. Leonard's school. Both of these recordings provide a contrast to the earlier ones that featured bird song and little else; now the sound is dominated by human activity as the lockdown is eased.
The soundmap can be found here:
simonbelshaw.co.uk/covid_soundmap.html
and all the audio recordings (including the first versions of Music Machine 45) can be found here:
soundcloud.com/user-851152701-412765042/sets/covid-19-soundmap
This project was achieved with support from Kaleider.
Posted by Simon Belshaw at 02:16 No comments:

Here is a little bit more information about the recordings and the process that is gone through to achieve the final audio collage.
I have made the recordings in locations that I have visited during this lockdown period either on foot or by bike. I intend to make a total of ten of these recordings.
The locations were not been chosen in advance; I take my recorder with me and make a recording when I find a suitable spot. However, I have found that my approach to making recordings has changed over the past few sessions. Initially I was happy to record at any location on my journey; I have found that as the project had progressed I actively seek locations that have more interest. So, for example, today I have made two recordings and have decided to use both as they have interesting elements within them.
The first recording I made today was close to an electricity sub station; you can hear the hum from that throughout the clip. The second recording uses my home-made hydrophone that I placed in a small ford in Thorverton. The sound changed quite noticeably half way through this recording as the microphone moved in the current.
The longest clip so far is the one that I made on Saturday in Starcross. I have kept the full recording as there are many interesting sounds on it. There is part of a conversation that two people had on opposite sides of the road, there is the sound of a train announcer, the train itself and a pelican crossing. Because many of the recordings have been dominated by bird song this one felt quite different.
The process that happens once I have all the recordings is as follows. The code for Music Machine 45, in common with most of the machines, is written in python. It is a digital Musique Concrète maker (or should that be mixer?) I can put in as many source recordings as I wish; the machine then decides how many smaller clips it is going to make from the originals. It then generates those smaller clips and decides how long they will be and from which section of the original. Once the clips are generated they are played back at various intervals, faded in and / or out, set to sound at a particular volume and location in the stereo field. As I say, this is very similar to Musique Concrète techniques and produces a work that is multi-layered and built from existing recordings.
Here's the link to the soundmap:
http://simonbelshaw.co.uk/covid_soundmap.html
You can listen to all the recordings (including the early finished versions of Music Machine 45) here:
https://soundcloud.com/user-851152701-412765042/sets/covid-19-soundmap
Posted by Simon Belshaw at 06:24 1 comment:

I was fortunate to receive some funding from the Kaleider Kfund and have been working on a project that uses audio recordings to create a new piece. 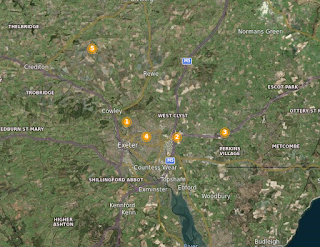 Posted by Simon Belshaw at 08:02 No comments: 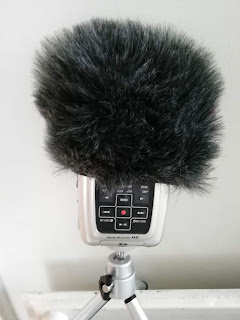 Posted by Simon Belshaw at 06:35 No comments: